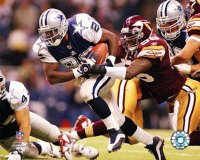 Emmitt holds the record for the most rushing yards ever. While getting tackled in the NFL has physically been shown to be equvilent to getting in a car wreck, Emmitt was told that even a ferrari has to get its tires alinged. Emmitt started seeing a chiropractor, and even had the chiropractor move his clinic closer to their practice facility. Emmitt credits chiropractic for his rushing record. He said, "Some of it may seem hokey to some people. But if you traveled where I've traveled, done what I've done, and seen the results that I've been getting, then you'd understand where I am coming from."

Find us on the map